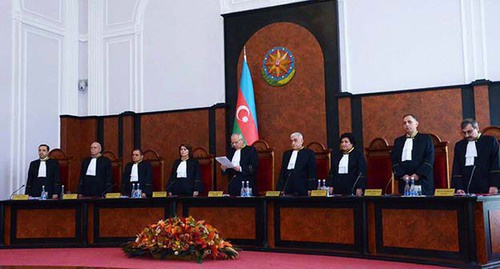 Today, the Constitutional Court of Azerbaijan has approved amendments to the Constitution, initiated by the President. Only journalists from state-owned and several pro-government media were allowed to enter the courtroom.

The draft amendments provide for the prolongation of the presidential term from 5 up to 7 years, the introduction of the provision on dissolution of the Parliament, and the establishment in Azerbaijan of the positions of Vice Presidents.

The opposition parties requested to ensure their participation in the court session in order to express their opinion concerning the amendments. However, the opposition's requests were also dismissed.

Let us remind you that the oppositionists and local experts spoke against the amendments to the Constitution, since they believe that the proposed changes will entail the establishment of authoritarianism in Azerbaijan.