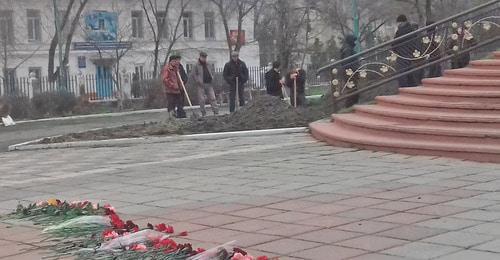 About 5000 people come to funeral of victims of Kizlyar attack

In Kizlyar, residents of the city and neighbouring regions came to the funeral ceremony to say farewell to the people who fell victim to an attack on believers near a city church.

The "Caucasian Knot" has reported that on February 18, 22-year-old Khalil Khalilov shelled people near a temple in Kizlyar. As a result, five women were killed, and four other people still stay at the hospital. The attacker himself was killed. The archbishop ordered to bury the killed women at the temple cemetery. The day of February 20 was announced to be a day of mourning in Kizlyar.

"Hundreds of Kizlyar residents came here early in the morning and offer their help. People have not yet recovered from the shock, and it is hard for them to find words to express their grief. All people who were at the temple and on the yard in front of it stayed alive due to our believer Irina Melkomova. She run to the assailant and used plastic bags to knock a rifle out of his hands. While she attracted the killer's attention, the believers managed to hide inside the temple," said priest Pavel Kalikin, the rector of the Saint George the Victorious Church.

The shooting in Kizlyar became the first incident in Dagestan in 2018, the responsibility for which was claimed by the terrorist organization "Islamic State" (IS), banned in Russia by the court. Meanwhile, experts interviewed by the "Caucasian Knot" believe the attacker was a "lone wolf" and he was not directly connected with the IS.