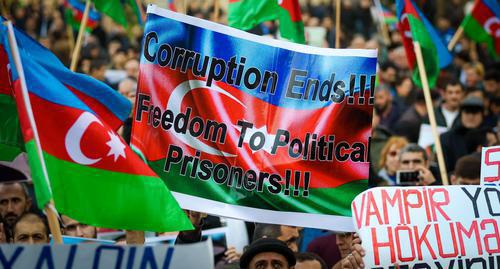 More than 500 people may be pardoned in Azerbaijan

The commission for pardoning has considered 1100 appeals and prepared for the Azerbaijani President a list of 500 names. The amnesty is expected to be dated to the Republic Day, May 28.

The "Caucasian Knot" has reported that in March, rights defenders expressed their regret about no traditional pardon on the occasion of Novruz Bayram this year. The commission for pardoning announced they did not have time enough to consider all appeals.

"The President personally decides when and whom to pardon," Alimamed Nuriev emphasized.

"According to our lists, there are more than 140 political prisoners in the country. It is naive to believe that they will be released. However, we hope for release of some of those who spent in prison four or five years already. Among them there are Ilgar Mamedov, the leader of the 'Republican Alternative' (ReAl) Party, Ilkin Rustamzade, an activist of the movement 'Nida', and journalist Seimur Khazi. It would be reasonable to release journalist Afghan Mukhtarly. All those cases provoked international criticism of Azerbaijan," Samir Kazymly noted.

Ogtai Gyulyalyev, a coordinator of the Centre for the Protection of Political Prisoners, expresses less optimistic expectations concerning the amnesty. "At best, 5-10 people may be released, including well-known political prisoners and several other persons whose sentences are close to completion," he said.

It should be noted that the Azerbaijani authorities reject the fact there are political prisoners in the country.