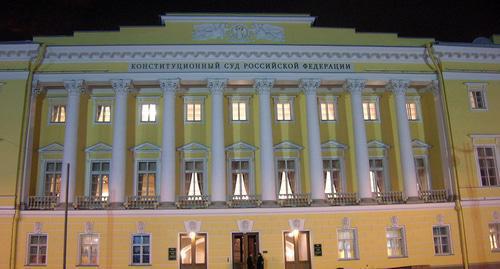 In Saint Petersburg, the Constitutional Court of Russia has begun to consider the issue on the Chechen-Ingush border. Officials representing the authorities passed into the courtroom without any obstacles. Meanwhile, some of the opponents of the agreement were not let to enter the building despite their registration, reported Ruslan Mutsolgov, the leader of the Ingush branch of the "Yabloko" Party.

The agreement on the border between Chechnya and Ingushetia signed on September 26 by Ramzan Kadyrov and Yunus-Bek Evkurov provoked mass protests. If the Constitutional Court of Russia supports the agreement, protest actions will be resumed, and the issue on the Prigorodny District will be raised, state members of the Ingush Committee of National Unity.

Many participants of the World Congress of the Ingush People came to the court session, but "much more" representatives of the Chechen side and of Yunus-Bek Evkurov arrived, Ruslan Mutsolgov reported.

This article was originally published on the Russian page of 24/7 Internet agency ‘Caucasian Knot’ on November 27, 2018 at 10:35 am MSK. To access the full text of the article, click here.

An "Agora" lawyer reports threats before trial on Ingush-Chechen border, Participants of pickets in support of Ingush residents detained in Saint Petersburg, On Akhmat Kadyrov bridge, activists unfold a banner reading: "It belongs to Ingushetia".