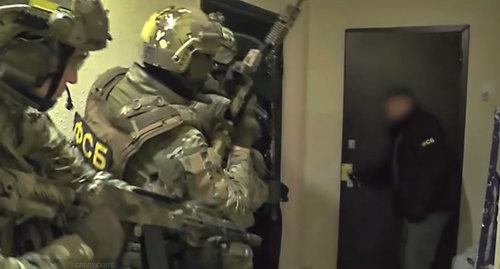 Under a pretext of holding charitable actions, natives of North-Caucasian Federal District (NCFD) were raising money to finance the "Islamic State" and "Dzhebhat-An-Nusra", recognized as terrorist organizations.

Today, it has become known about the detention of seven persons suspected of raising more than 38 million roubles for militants from the "Islamic State" and "Dzhebhat-An-Nusra", banned in Russia. Searches were conducted in Moscow, Chechnya, Dagestan, and Ingushetia.

The detained members of the criminal grouping posted the details of bank cards in social networks and chats of instant messengers, where users "were subjected to target ideological propaganda," the FSB reported.

According to the FSB, the conspiratorial network was organized by I. S. Akhmednabiev, a supporter of radical Islam, who stayed abroad to escape justice.

"The 'foundations' raised money under a pretext of building mosques and helping Muslims with low incomes," reports the FSB Public Relations Centre.

All the detainees are natives of the North-Caucasian republics.

This article was originally published on the Russian page of 24/7 Internet agency ‘Caucasian Knot’ on December 13, 2018 at 01:19 pm MSK. To access the full text of the article, click here.

KBR’s law enforcers report 11 cases of financing terrorism in 2017, NAC reports detention of those who fund militants of Dagestan and Kabardino-Balkaria, Resident of Chegem District convicted for financing militants.