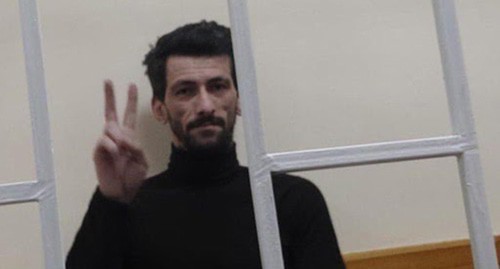 Vadim Cheldiev, charged in a case on a rally in Vladikavkaz, left in custody until August 18 by the court's decision.

The "Caucasian Knot" has reported that Vadim Cheldiev was detained even prior to the protest rally in Vladikavkaz. As the alleged initiator of the rally, the activist was charged with publicly disseminating knowingly false information about the coronavirus infection, extremism, and disorderly conduct. Moreover, Vadim Cheldiev was accused of using violence against a public officer during the transportation to the place of detention. Vadim Cheldiev explained clashes at the rally in Vladikavkaz and a clash during his transportation by provocations arranged by law enforcers.

"The criminal case on the events in North Ossetia is being developed according to the Ingush scenario. It seems that the earlier arrested people are being taken to Rostov-on-Don, where a preliminary investigation will continue. This means a distance of 800 km for most advocates. <...> By the way, nobody took the trouble to invite advocate Andrei Sabinin to the court hearing (although that fact has not prevented him from being here, of course)," reports today the "Sabinin in the Caucasus" Telegram channel.

This article was originally published on the Russian page of 24/7 Internet agency ‘Caucasian Knot’ on June 8, 2020 at 04:46 pm MSK. To access the full text of the article, click here.