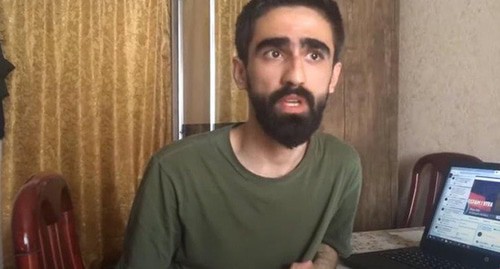 Today, Giyas Ibragimov, a member of the movement "Nida", detained during a protest rally criticizing the police, has returned home after an administrative protocol was drawn up against him. The activist claims that law enforcers unreasonably accused him of disorderly conduct and stated that he allegedly attempted to commit suicide.

The "Caucasian Knot" has reported that on June 9, Giyas Ibragimov went onto the roof of his house with a poster in his hands reading: "Stop bending, stop keeping silence, and say something." The activist used a loudspeaker and called on local residents to protest against the tough actions of law enforcers related to violation of the quarantine regime. The police detained the activist, and the law enforcers claimed they had prevented him from committing suicide.

This morning, Giyas Ibragimov has been released from a police station. The activist told the "Caucasian Knot" correspondent that a protocol on disorderly conduct was drawn up against him.

"They accused me of disorderly conduct. But in fact, it was a protest rally. I went up to the roof of the five-storey building of our dormitory and protested against the brutal treatment <by law enforcers> of people living in an apartment building in Dadash Bunyadzade Street in the 'Yeni Yasamal' residential complex", said Giyas Ibragimov.

The activist rejected the police version that he was allegedly going to commit suicide.

Let us remind you that on June 8, about 50 employees of the Ministry of Internal Affairs (MIA) of Azerbaijan conducted a special operation in the Yeni Yasamaly residential complex in Baku. 11 people were delivered to the police station. According to the police, the detainees were throwing various items from the balconies at the law enforcers, who were detaining quarantine violators.

This article was originally published on the Russian page of 24/7 Internet agency ‘Caucasian Knot’ on June 10, 2020 at 02:11 pm MSK. To access the full text of the article, click here.