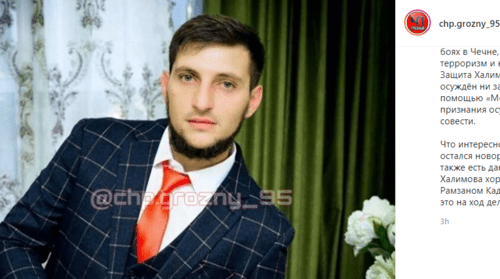 Instagram users claim there is no extremism in the actions of Aitakhadji Khalimov, a resident of Kaliningrad, who posted videos about the war in Chechnya. Users of the social network note that the state-run TV Channel also showed similar videos.

The "Caucasian Knot" has reported that in June, the Second Western District Military Court found 27-year-old Aitakhadji Khalimov from Kaliningrad guilty of public calls for terrorist activities and sentenced him to 3.5 years of imprisonment for posting on the social network the documentary videos about the combat actions in Chechnya.

Today, the Instagram public account "ChP Grozny_95" has posted the news about the court's verdict to the resident of Kaliningrad. In their comments under the news, users noted there was no extremism in the Aitakhadji Khalimov' actions. "That is, it was acceptable to bomb the city and the whole republic and kill people, but it is not acceptable to talk [about it] and show it," user _borzoi_shatoi_grozniy wrote.

"Those who were fighting and destroying the Chechen people are not imprisoned there," noted user ahmathanov_095 as translated from the Chechen language by the "Caucasian Knot" correspondent.

The law enforcement bodies were to limit themselves to an explanatory conversation with Aitakhadji Khalimov and take tough measures only in case of repeated violations, believes user zarema_950695. The user also pointed out that the state-run "Grozny" TV Channel also showed the footage of the war.

This article was originally published on the Russian page of 24/7 Internet agency ‘Caucasian Knot’ on June 12, 2020 at 01:13 pm MSK. To access the full text of the article, click here.