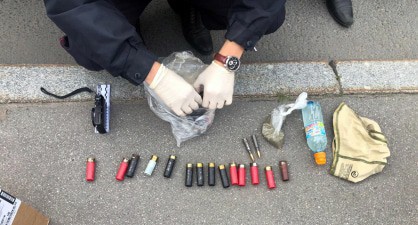 In Saint Petersburg, Terman Alimagomedov, a former militant from Dagestan, rendered resistance while the police tried to detain him and was shot dead by a policeman. The police found firearms and ammunition in the suspect's car, the Investigating Committee of the Russian Federation (ICRF) reported.

According to investigators, tonight, while the police tried to stop a car to check documents, the driver hit the policeman and tried to escape. During his detention, the suspect tried to take possession of the policeman's service weapon, and as a result, the policeman shot three times.

"The attacker was wounded and was provided with the first aid, but died. The suspect was identified as Terman Alimagomedov, born in 1992, a native of Dagestan, who had an earlier criminal record for organizing an illegal armed formation (IAF) and participating in it, as well as for arms trafficking," the ICRF reports on its official website.

A person with the same name is included in the "List of Terrorists and Extremists" posted on the website of the "Rosfinmonitoring" (the Russian Federal Service for Financial Monitoring).

This article was originally published on the Russian page of 24/7 Internet agency ‘Caucasian Knot’ on August 12, 2020 at 12:24 pm MSK. To access the full text of the article, click here.