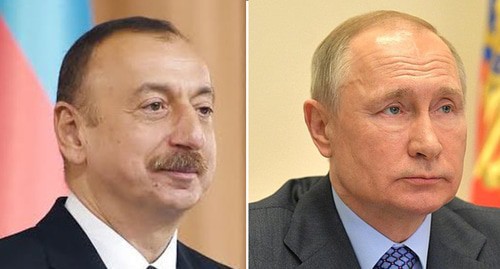 The statement by the President of Azerbaijan about a joint peacemaking mission of Russian and Turkish militaries in the Karabakh conflict zone was not included into the document signed by Aliev, Putin and Pashinyan on the cessation of hostilities in Nagorno-Karabakh. In his today's statement, Vladimir Putin also focused on the fact that a Russian peacemaking contingent is being deployed in the conflict zone.

The "Caucasian Knot" has reported that today, at 00:00 a.m. Moscow time the statement of Russia, Azerbaijan and Armenia on the cessation of hostilities in Nagorno-Karabakh has come into force. In particular, it deals with the deployment of Russian peacemakers along the contact line in Nagorno-Karabakh and along the corridor connecting it with Armenia. At the same time, the President of Azerbaijan said that the peacekeeping mission will be carried out jointly by militaries from Russia and Turkey.

However, the joint statement of Presidents of Azerbaijan and Russia and Prime Minister of Armenia on the end of hostilities in Nagorno-Karabakh does not mention any presence of Turkish peacemakers in the Karabakh conflict zone.

Ilham Aliev has also voiced out the idea of a joint peacemaking mission of Russian and Turkish militaries during his video conference with Vladimir Putin, accompanying it by gratitude to the President of Turkey, as follows from the transcript of the conversation posted on the Russian-language version of the website of the President of Azerbaijan.

"I would also like to express my gratitude today to the President of the Republic of Turkey, Mr Recep Tayyip Erdogan for his active participation in the political settlement of the conflict; and one of the points of today's statement is the joint peacemaking mission of Russia and Turkey," Ilham Aliev's words are quoted in the publication.

Vladimir Putin, as follows from the transcript, refrained from commenting on the participation of Turkish peacemakers.

The peacemaking contingent of Turkish militaries is not mentioned in the statement of the President of Russia, posted today at 1:35 a.m. Moscow time on the Kremlin's website. It tells only about peacemakers from Russia.

This article was originally published on the Russian page of 24/7 Internet agency ‘Caucasian Knot’ on November 10, 2020 at 10:53 am MSK. To access the full text of the article, click here.