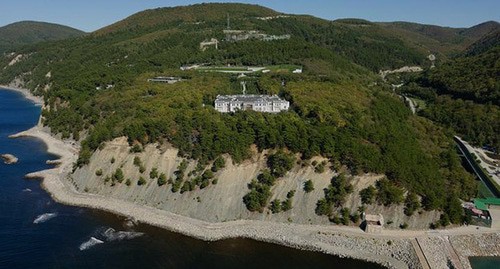 In its investigation "Palace for Putin. Story of the Biggest Bribe", the Anti-Corruption Foundation (known as the FBK) has not so much made a sensation, but rather systematized data from various sources on the construction of Putin's "dacha" (summer residence) near Gelendjik, analysts assert.

The "Caucasian Knot" has reported that after Navalny's arrest, the FBK has released an investigation about Putin's palace near the city of Gelendjik, Krasnodar Territory, the largest private house in Russia, which is being built for money of state-owned companies. The total area of the palace is over 17,000 square meters; a land plot of 7000 hectares is adjacent thereto; this area could house 39 Monaco principalities; and the construction cost is about 100 billion Russian roubles, says Alexei Navalny.

For a long time, the actions of Krasnodar ecologists were aimed at countering the seizure of forest lands along the perimeter of "Putin's palace," Evgeny Vitishko, an ecologist, told the "Caucasian Knot" correspondent.

"I've watched the FBK's investigation with pleasure. Our guesses have been confirmed that around, in Krinitsa itself, and along the Pshada River, some people close to Putin had been acting. But we never imagined that it was all a single whole, that it was all Putin," Mr Vitishko has stated.

Dmitry Shevchenko, the head of the NGO "Civil Initiative against Eco-Criminality", believes that the uniqueness of the FBK's film is not that there is something new there, since all the facts had already been voiced out earlier in various sources, but that this is the first attempt to systematize all this information and present it logically.

Mikhail Benyash, an advocate, told the "Caucasian Knot" correspondent that he had lived in Gelendjik for 10 years; and all local residents knew that "Putin's dacha" had been built in Praskoveevka.

Mr Benyash believes that "the FBK inquiry will have consequences for the president," because a world leader should think about the fate of his homeland, and not get drowned in luxury."

"I just imagine the amount of money spent on this all. The city of Gelendjik is nearby, without potable water, with its stinking sewage pipe draining out into the sea – for decades they cannot build a normal sewage system there. They say that such system costs three billion roubles, and do not know where to get it; but here, they are spending dozens of billions for the palace," Mikhail Benyash has stated.

This article was originally published on the Russian page of 24/7 Internet agency ‘Caucasian Knot’ on January 20, 2021 at 09:54 pm MSK. To access the full text of the article, click here.