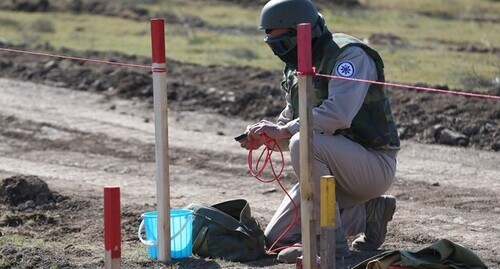 The minefield maps that Yerevan has handed over to Baku in exchange for 15 militaries make an essential, but only small part of the information about minefields, Nikol Pashinyan, the Acting Prime Minister of Armenia, has stated.

The "Caucasian Knot" has reported that on June 12, Azerbaijan exchanged 15 Armenian militaries for the maps of 97,000 anti-tank and antipersonnel mines set up in the Agdam District.

Mr Pashinyan has accused "some opposition circles" of stating that "the minefield maps could have been exchanges for all our prisoners of war (POWs) kept by Azerbaijan."

"I want to note that in December we exchanged such maps; and these are the maps of minefields that are in Azerbaijan's rear," the TASS quotes Nikol Pashinyan as saying.

This article was originally published on the Russian page of 24/7 Internet agency ‘Caucasian Knot’ on June 14, 2021 at 02:53 am MSK. To access the full text of the article, click here.