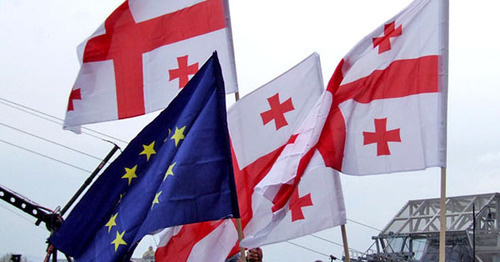 The "Caucasian Knot" has reported that on June 27, 2014, in Brussels, the Georgian Prime Minister, Irakli Garibashvili, signed an association agreement with the EU, which provides for the country's entry into the EU free trade zone. The Georgian Parliament ratified the document unanimously on July 18, 2014.

Now, the Georgian Premier, Irakli Garibashvili, has signed an application for the country's accession to the EU, the Georgian government reported on March 3 in its website.

"Today is a historic day for Georgia – I am signing an application for EU membership on behalf of the country. Today Georgia is closer to the EU than ever before," Mr Garibashvili said in his statement (translated by the "Caucasian Knot" correspondent).

Shortly before the Premier's speech, Mamuka Khazaradze, the chairman of the "Lelo" Party, spoke on "Formula" TV and said that his party had called on the Georgian President to personally lead the process of Georgia's accession to the EU. All the political forces of Georgia should mobilize around the president, he has noted.

This article was originally published on the Russian page of 24/7 Internet agency ‘Caucasian Knot’ on March 3, 2022 at 09:29 pm MSK. To access the full text of the article, click here.