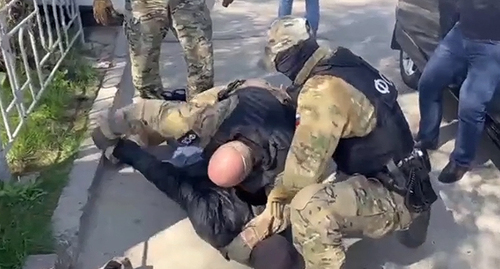 FSB announces prevention of a terror act in Stavropol Territory

A suspect in preparing a terror act in the Stavropol Territory has been detained, the Russian FSB (Federal Security Bureau) has informed.

According to the FSB, a supporter of the "Islamic State" (IS)*, a terrorist organization banned in Russia by the court, had planned to commit a terror act on a transport infrastructure facility in the Stavropol Territory.

The suspect of involvement in the IS* and plotting a terror act has been detained; explosives were confiscated from him, the RIA "Novosti" writes with reference to the FSB.

The "Caucasian Knot" has earlier reported the detention of an alleged supporter of the IS* in Stavropol. According to law enforcers, he had planned to commit a terror act at the railway station. Elements of an explosive device were confiscated from the detainee, the FSB reported on April 13.

*The organization was recognized as extremist by the decision of the Supreme Court of the Russian Federation; its activities in the territory of Russia are prohibited.

This article was originally published on the Russian page of 24/7 Internet agency ‘Caucasian Knot’ on April 25, 2022 at 10:07 am MSK. To access the full text of the article, click here.

Alleged supporter of IS* detained in Stavropol, Resident of Ingushetia suspected of aiding Syrian militants, Ingush woman suspected of being trained in terrorist camp.