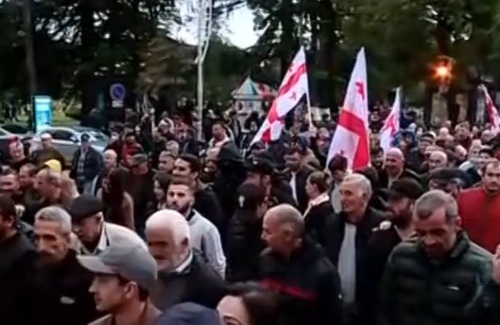 Over 20 Saakashvili supporters detained during protest in Batumi

Last night, in Batumi, clashes broke out of law enforcers with supporters of Mikheil (Mikhail) Saakashvili, the third president of Georgia, after policemen demanded to remove the tents set up by activists. As a result, more than 20 protesters were detained.

The "Caucasian Knot" has reported that on April 27, doctors claimed deterioration of Saakashvili's health condition, after which his supporters demanded to transfer him to a foreign clinic for treatment. On May 6, in Tbilisi, Batumi and near the Rustavi Prison, where Saakashvili is kept, his supporters held protests and stated that his health condition prevents him from serving his sentence in prison.

After the detentions, law enforcers cleared the street of tents, but several protesters said they would remain in place until Saakashvili was transferred to a foreign clinic.

This article was originally published on the Russian page of 24/7 Internet agency ‘Caucasian Knot’ on May 7, 2022 at 10:22 am MSK. To access the full text of the article, click here.