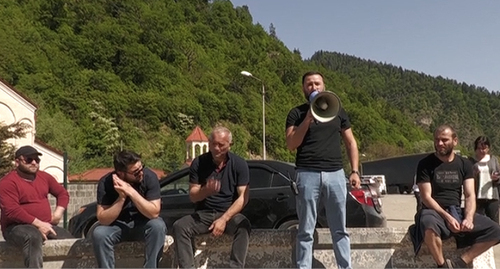 The bosses of the IDS "Borjomi" Company have paid wages only to those workers who had signed contracts; and those who disagree with the new working conditions are under pressure, strikers said at their meeting with Nino Lomdjariya, the Georgian Ombudsperson.

The "Caucasian Knot" has reported that the strike of the workers of two mineral water bottling factories in the town of Borjomi has been held since May 31. They demand to punish the perpetrators of blackmail, pressure and threats against workers, improve working conditions and reinstate the fired workers.

On the tenth day of the strike, the entrances to both factories remain blocked, Giorgi Diasomidze, the trade union leader, told the "Caucasian Knot" correspondent.

On June 9, Nino Lomdjariya, the Ombudsperson of Georgia, arrived in Borjomi and met the strikers of the two factories, the Ombudsperson's website has informed. Strikers told her about the pay cuts, fired workers and possible discrimination.

Thus, protesters reported that the company has paid the wages only to those workers who had signed the proposed contracts, and those who disagree with the worsening of working conditions, have failed to receive the pay for the work already done. Factory workers also complained of pressure and intimidation. Nino Lomdjariya promised to investigate the workers' complaints of discrimination.

This article was originally published on the Russian page of 24/7 Internet agency ‘Caucasian Knot’ on June 10, 2022 at 01:19 am MSK. To access the full text of the article, click here.