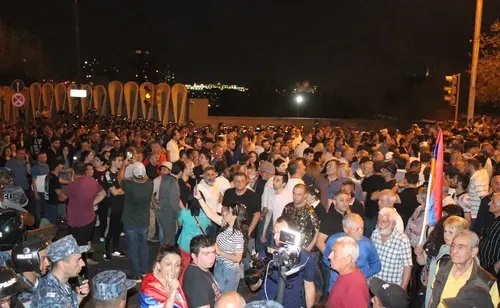 Supporters of the opposition have called on their activists to gather on June 11 in a Yerevan square and speak out against political repressions.

The "Caucasian Knot" has reported that on June 9, the opposition held a march demanding the resignation of the Pashinyan's government. On June 10, they marched to the presidential residence, where a sitting of the Council of Foreign Ministers of the CSTO (Collective Security Treaty Organization) was held at the moment, and called the participation of the Prime Minister, Nikol Pashinyan, in the negotiations on Armenia and Karabakh illegitimate.

The opposition has invited protesters to come to the rally against political repressions scheduled for June 11 in France Square, the "Caucasian Knot" correspondent has reported.

The rally will start at 7:00 p.m. local time, the opposition has announced.

Let us remind you that the opposition has been holding its disobedience actions since April 25. Its supporters were outraged at Pashinyan's statement on April 13, in which the Premier admitted a possibility of "lowering the bar" on the status of Nagorno-Karabakh, referring to the calls of the international community.

This article was originally published on the Russian page of 24/7 Internet agency ‘Caucasian Knot’ on June 10, 2022 at 11:18 pm MSK. To access the full text of the article, click here.

Activists hold a march in Yerevan amid meeting of CSTO Council of Foreign Ministers, Opposition blames Lavrov for pressing Armenia on Nagorno-Karabakh issue, Armenian opposition supporters call on Lavrov to comply with agreements on Nagorno-Karabakh.