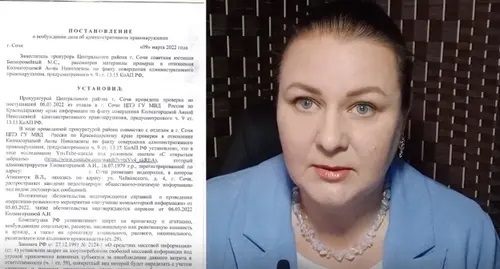 A court in Sochi has imposed a fine of 15,000 roubles on Anna Kolmagortseva, finding her guilty of abusing the freedom of media for her interview with Vladimir Atamanchuk, the coordinator of the "Civil Initiative" public movement about the situation in Ukraine.

The "Caucasian Knot" has reported that on May 21 it became known that Atamanchuk was accused of discrediting the army in connection with his opinion on the situation in Ukraine. On May 23, the Tsentralny District Court of Sochi fined him by 30,000 roubles.

The Magistrate Court of the Khosta District of Sochi fined Kolmagortseva by 15,000 roubles under the article on abuse of the freedom of information, the "OVD-Info"* human rights project reported on June 10.

Ms Kolmagortseva was accused of posting an interview with Vladimir Atamanchuk, the coordinator of the Sochi-based movement "Civil Initiative", who spoke out against the special operation in Ukraine. The court found her guilty, despite the fact that she asked to stop the case referring to her only income – the pension she receives for a child for the breadwinner's loss.

*The project has included by the Russian Ministry of Justice into the list of unregistered public associations acting as a foreign agent.

This article was originally published on the Russian page of 24/7 Internet agency ‘Caucasian Knot’ on June 11, 2022 at 03:56 am MSK. To access the full text of the article, click here.

Second protocol on discrediting Russian army drawn up against “Wild Paratrooper” blogger from Novorossiysk, After refusal from service, Stavropol activist accused of discrediting militaries, Police search a house of parents of “Fortanga” editor-in-chief in Sunzha.