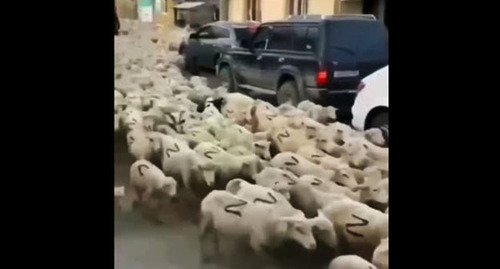 Publication of a video with sheep marked with the letter Z on the Telegram channel of the Ministry of Agriculture and Food of Dagestan was dictated by false ideas about patriotism, Dagestani journalists point out.

The “Caucasian Knot” has reported that the official Telegram channel of the Ministry of Agriculture and Food of Dagestan posted a video with a flock of sheep moving under the Gazmanov’s song “Forward, Russia!”, and each animal had the letter Z on its side. Social media users criticized officials for their associations with the symbol of the special military operation in Ukraine. After the criticism had been expressed in the comments, the Ministry deleted the video.

Magomed Magomedov, the deputy editor-in-chief of the weekly newspaper “Chernovik” (Rough Draft), treats the publication of the video to be the inexperience of the people responsible for running the Telegram channel. “This is a common desire to show ‘patriotism,’ fulfilled by a person, who did not understand the context. Those who tagged sheep in this way, most likely, did not put much symbolism into their act. I think that it’s not worth talking about patriotism and other similar issues in this case. This is an ordinary coincidence of circumstances, which was expressed in such a stupid way,” Magomed Magomedov told the “Caucasian Knot” correspondent.

Gadjimurad Sagitov, the editor-in-chief of the newspaper “Novoye Delo” (New Clause), considered the situation a small part of the big problem of the perception of patriotism. “At our place, it is ‘enthusiasts,’ who are mainly responsible for expression of patriotism, and in their perception, love for the motherland can be expressed in such a way. It is difficult for them to understand what real sacrifice and love for the motherland are. The activities of such ‘specialists’ include assent, pleasing the authorities, and holding similar and other actions,” Gadjimurad Sagitov told the “Caucasian Knot” correspondent.

This article was originally published on the Russian page of 24/7 Internet agency ‘Caucasian Knot’ on June 22, 2022 at 05:35 pm MSK. To access the full text of the article, click here.

After criticism, Dagestani "Minselkhozprod" removes clip about sheep with Z symbol, Reaction to graffiti with Z becomes message of Azerbaijani authorities, Resident of Baku detained for graffiti with letter Z.