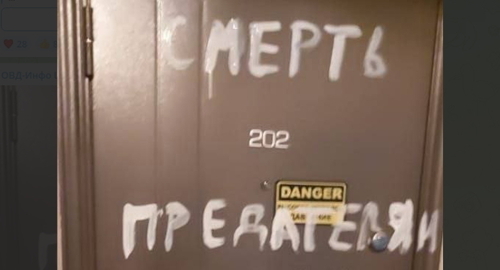 Unidentified persons have left a threatening inscription on the apartment door of Sergey Medvedev, a Volgograd pacifist; law enforcers have questioned his neighbours.

Sergey Medvedev, an anti-war activist, informs about threats and pressure on him.

According to his story, the inscription "Death to traitors. Za!!! Peace" has appeared on the door of his apartment. He also received threats by mail; and the author of the letter introduced himself as a law enforcer, the human rights project "OVD-Info"* has reported citing Mr Medvedev, who has added that policemen came and interrogated his neighbours.

The "Caucasian Knot" has also reported that in the Volgograd Region, activists are often prosecuted under an article on discrediting the army. Thus, on June 22, it became known that a court in the Volgograd Region had fined Alexei Martynenko by 30,000 roubles, finding him guilty of discrediting the Russian Armed Forces for a photo and a post he placed in a social network.

*The project has been put by the Russian Ministry of Justice on the list of unregistered public associations acting as a foreign agent.

This article was originally published on the Russian page of 24/7 Internet agency ‘Caucasian Knot’ on June 23, 2022 at 04:20 am MSK. To access the full text of the article, click here.