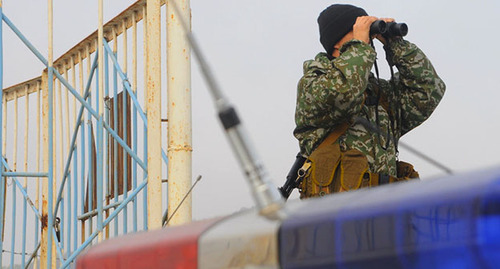 FSB reports about detention of a terrorist accomplice

Abdurakhman Abdurakhmanov, a native of Dagestan, was arrested on the charge of involvement in the “Islamic State” (IS, a terrorist organization, banned in Russia by the court, – note of the “Caucasian Knot”). The suspect repeatedly made money transfers to IS members, the Russian FSB reports.

According to the investigators’ version, Abdurakhman Abdurakhmanov is “a member of a deeply conspiratorial IS unit.” The money he sent was allegedly used to carry out a terror act in a nightclub in Istanbul on January 1, 2017, which killed 39 people, including a woman from Russia.

Abdurakhman Abdurakhmanov’s brothers are also put on the international wanted list for their participation in hostilities in Syria.

This article was originally published on the Russian page of 24/7 Internet agency ‘Caucasian Knot’ on June 27, 2022 at 04:20 pm MSK. To access the full text of the article, click here.

FSB reports about prevention of a terror act in Sochi, Alleged supporter of IS* detained in Stavropol, Resident of Ingushetia suspected of aiding Syrian militants.