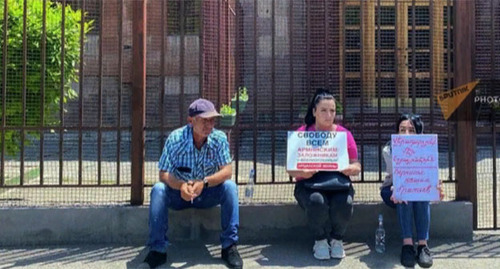 Relatives of Armenian prisoners of war held a protest rally in front of the Russian consulate in Gyumri calling for help in the return of their relatives from Azerbaijani captivity.

On May 25, Prime Minister Nikol Pashinyan announced that 39 Armenian citizens remained in the Azerbaijani captivity. The Prime Minister of Armenia proposed to involve the international community in their return.

Today, relatives of Armenian prisoners of war (POWs), captured after the end of hostilities in Nagorno-Karabakh in the village of Khtsaberd in December 2020, have gathered in front of the Russian consulate in Gyumri and demanded to release their relatives from captivity, Karapet Pogosyan, a resident of Gyumri, reports on his page in Facebook*.

The participants of the action stated that Russia, as a party to the truce agreement of November 9, 2020, which contains the clause on the return of prisoners, must force Azerbaijan to return the Armenian prisoners of war. “Our children were captured just a stone’s throw from the Russians, and they must return them,” said a female participant of the protest action to the “Gala TV”. The woman’s son was captured in the village of Khtsaberd in December 2020, when the Russian peacekeepers were already in Karabakh.

Another female participant of the protest action, whose son also fell into the Azerbaijani captivity in Khtsaberd after the announcement of the truce, added that for a year and a half, the relatives of the prisoners applied to all authorities in Armenia, but they received no result.

This article was originally published on the Russian page of 24/7 Internet agency ‘Caucasian Knot’ on June 28, 2022 at 06:28 pm MSK. To access the full text of the article, click here.