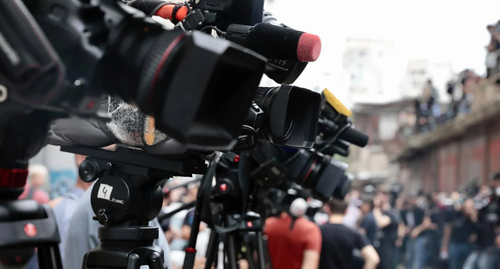 Murman Zoidze, a cameraman of the “Pirveli” TV Company, continues to work as usual. But after an attack on him, Adjarian journalists proceed with increased caution, as the local media are to cover stories that cause public outcry and its employees often face aggression, including from officials.

The “Caucasian Knot” has reported that on June 19, cameraman Murman Zoidze was beaten during an attack on a film crew of the opposition “Pirveli” TV Company in Batumi. Attackers said that they did not like the editorial policy of the TV Company. A mother of the cameraman was taken to hospital because of the attack on him.

Murman Zoidze, a cameraman of the “Pirveli” TV Company, continues his professional activities, says his colleague Nato Gogeliya. According to her, on the day of the attack, she and Murman Zoidze were preparing a report on the upcoming rallies for the European future of Georgia. Unknown people approached them and provoked a conflict.

Human rights defender Malkhaz Chkadua notes that in Adjara, law enforcers often put pressure on detainees. “On June 25, a participant in a rally against the government and for Georgia’s entry into the EU was taken to the police station in Batumi. According to him, he was insulted and hit there ... just because he expressed his opinion about Bidzina Ivanishvili,” Malkhaz Chkadua stated.

Nodar Meladze, an editor of the “Pirveli” TV Channel, adds that pressure on journalists in Adjara is often exerted by officials, including top-ranking officials, and this sets the tone for the behaviour of their supporters.

This article was originally published on the Russian page of 24/7 Internet agency ‘Caucasian Knot’ on July 1, 2022 at 12:15 pm MSK. To access the full text of the article, click here.