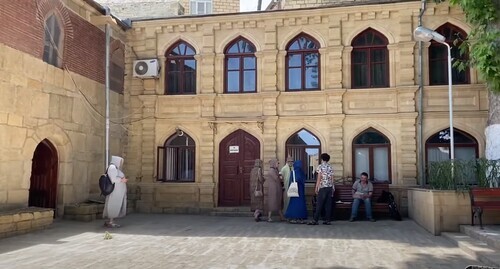 Residents of Dagestan speak against collecting money for visiting mosques

Tourists should be explained the rules of the dress code and behaviour in mosques, but not to take fees from them, the majority of Makhachkala believers interviewed by the "Caucasian Knot" believe.

The "Caucasian Knot" has reported that the administration of the mosque in the city of Derbent tried to introduce the entrance fees for tourists, but after the intervention of local authorities, this initiative was cancelled, the city Mayoralty has informed.

The believers interviewed by the "Caucasian Knot" correspondent expressed different opinions about visiting mosques by tourists.

Shamil, a resident of Makhachkala, believes that taking fees for visiting mosques is a wrong decision that negatively characterizes the Islam and Muslims. According to his version, mosque administrations, on the contrary, should be interested in tourists visiting mosques; and there should be no entry fee for this.

Murad, another Makhachkala resident, spoke out against tourists visiting mosques. In his opinion, a mosque is, first of all, a place for worship not for excursions. He has noted that many tourists fail to observe the dress code when visiting mosques, but even if these rules are followed, tourists should not visit the mosque prayer halls.

Rashid, a resident of Dagestan, believes that visiting mosques should be free for tourists, and setting a certain fee is "anti-advertising" both for Dagestan and for the Islamic religion.

This article was originally published on the Russian page of 24/7 Internet agency ‘Caucasian Knot’ on July 3, 2022 at 00:04 am MSK. To access the full text of the article, click here.

Video with a tourist in a swimsuit provokes disputes about dress code in Dagestan, Social media users criticize young women for half-naked photos on Dombay, Memo with dress code for tourists sparks disputes in Dagestan.