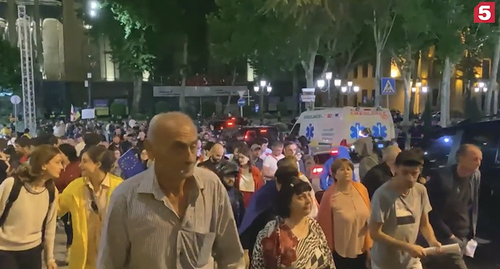 The participants of the campaign "Home to Europe" have spent the last night in the Republic Square; it passed without incidents. In the morning, supporters of the European integration gathered in front of the building of the government of Georgia and demanded a number of reforms to be implemented in the country.

The "Caucasian Knot" has reported that supporters of the European integration are regularly holding protest actions in Georgia. Thus, on June 20, the "Shame" movement held a rally in Tbilisi under the slogan "Home to Europe", in which about 120,000 people took part. On June 24, at least 60,000 people took part in the action "Home to Europe" in Tbilisi.

"We believe that the only way is the resignation of Premier Garibashvili and the formation of an interim government of national accord, which will ensure the implementation of the reforms that Europe is asking us for in the next six months. I am sure that we will achieve this by our struggle," the "Rustavi-2" TV Channel has quoted one of the activists as saying on its website.

Supporters of the European integration have also stated that they intend to continue their protest action.

This article was originally published on the Russian page of 24/7 Internet agency ‘Caucasian Knot’ on July 4, 2022 at 08:02 am MSK. To access the full text of the article, click here.

Journalists count over 60,000 participants of rally in Tbilisi, Supporters of European integration hold rallies in Tbilisi and Zugdidi, Tbilisi rally supports Georgia's accession to the EU.