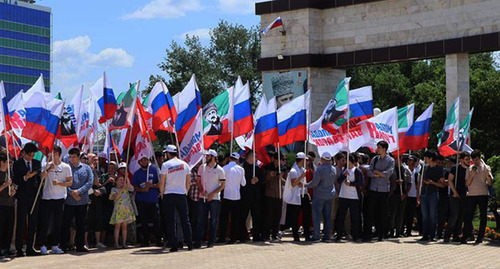 A rally in support of the special military operation in Ukraine in Grozny was organized by the Public Chamber of the Republic of Chechnya. The rally was attended by 1500 people, Chechen publications reported.

The “Caucasian Knot” has reported that on March 25, Ramzan Kadyrov reported about mass prayers in support of participants of the special military operation. An author of the “Chechnya Inside” blog on the “Caucasian Knot” suggests that people are forced to take part in prayers. In their comments, users confirm that public sector employees are gathered in mosques under the threat of dismissal.

On July 3, more than 1500 people gathered for a rally in support of the special military operation in Ukraine, which was held on the territory of the Memorial Complex of Glory named after Akhmat-Khadji Kadyrov. The rally was organized by the Public Chamber of the Republic of Chechnya. The event was attended by “members of the Public Chamber of Chechnya, members of public and trade union organizations, patriotic and veteran movements of the republic, political parties and associations, and individual public figures,” reads a report published by the “Chechnya Today” on the evening of July 3.

According to Chechen publications, 1500 people took part in the rally.

This article was originally published on the Russian page of 24/7 Internet agency ‘Caucasian Knot’ on July 4, 2022 at 12:02 pm MSK. To access the full text of the article, click here.