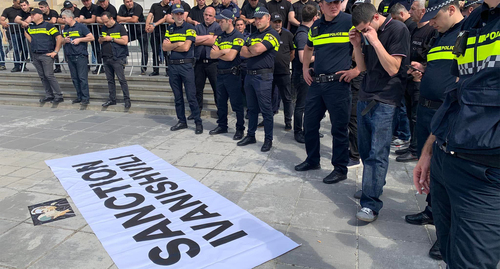 A protest action held by supporters of European integration in front of the government building lasted for several hours. The activists were making noise and whistling to attract the attention of Georgian Prime Minister Irakli Garibashvili. The participants of the action left the place only after it became known that the government meeting had not taken place.

The "Caucasian Knot" has reported that supporters of the European integration are regularly holding protest actions in Georgia. Thus, on June 20, the "Shame" movement held a rally in Tbilisi under the slogan "Home to Europe", in which about 120,000 people took part. On June 24, at least 60,000 people took part in the action "Home to Europe" in Tbilisi. This morning, the supporters of European integration have gathered in front of the building of the Georgian government and demanded to hold a number of reforms in the country.

The protest action held by the organizers of the “Home, to Europe” has ended near the building of the government of Georgia. This morning, for several hours, the participants of the protest action expressed their protest through making noise, whistling, and chanting exclamations. According to the protesters, their goal was to make Georgian Prime Minister Irakli Garibashvili hear the voice of the people at a government meeting, the “Georgia Online” reported.

The activists planned to meet members of the Cabinet of Ministers with noise before the today’s government meeting. A regular working meeting is held on Mondays at noon. However, today, it has not been held for unknown reasons, the “News-Georgia” reports. Shota Digmelashvili, one of the organizers of the rally, announced the end of the rally, as “the government meeting did not take place today,” the publication says.

This article was originally published on the Russian page of 24/7 Internet agency ‘Caucasian Knot’ on July 4, 2022 at 01:43 pm MSK. To access the full text of the article, click here.