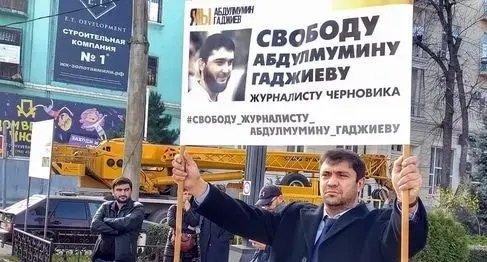 At their solo pickets held in central Makhachkala, Magdi Kamalov, the founder of the "Chernovik" outlet, demanded to stop persecuting journalists, while Magomed Magomedov, a deputy editor-in-chief of the outlet, has called for the release of Abdulmumin Gadjiev.

The "Caucasian Knot" has reported that Gadjiev's colleagues are regularly holding solo pickets in his support at the intersection of Gamzatov and Dakhadaev Streets in central Makhachkala.

Abdulmumin Gadjiev, a journalist of the newspaper “Chernovik”, as well as Abubakar Rizvanov, the head of the “Ansar” charity foundation, and Kemal Tambiev, have been charged with financing terrorism.

On July 4, in Makhachkala, two solo pickets in Gadjiev's support were held. Magdi Kamalov, the founder of the "Chernovik", stood with a poster "Freedom to journalism"; the second picket was held by Magomed Magomedov, a deputy editor-in-chief of the "Chernovik". He unfolded a poster with the image of Abdulmumin Gadjiev, a "Chernovik" journalist, recalling that the editorial office demands to stop the criminal case against him and release him, the "Chernovik" has reported.

During Gadjiev's stay in custody, neither investigators, nor the court could prove the accusations against him, Mr Magomedov has stated. Both pickets lasted an hour, the "Kavkaz.Realii"* has written.

*The Radio Liberty project has been found by the Russian Ministry of Justice as a foreign agent.

This article was originally published on the Russian page of 24/7 Internet agency ‘Caucasian Knot’ on July 4, 2022 at 06:58 pm MSK. To access the full text of the article, click here.