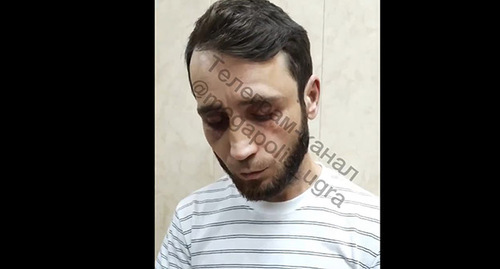 A court fined arrested Arthur Ilyaskhanov under the article about discrediting the Russian Armed Forces. The man stated that he was afraid of being kidnapped by the Chechen Diaspora and that he received threats.

On July 25, members of the Chechen community in Nizhnevartovsk said they would demand an apology from a native of Dagestan for making offensive remarks on behalf of the Chechens. The resident of Dagestan himself explained that he behaved inappropriately and voiced insults under the influence of alcohol.

A video of the incident, posted by Muksun.fm shows a native of Northern Caucasus breaking two bottles in a store in protest that he was not allowed to buy alcoholic drinks. The man refused to pay damages and remove the glass fragments, adding that a Chechen “won’t wipe a puddle from the floor for a Russian.” He also questioned the effectiveness of the actions of the Russian troops in Ukraine and spoke words of support for the United States and Ukraine.

Arthur Ilyaskhanov has said that after serving his arrest, he wants to return home, but they want to take him to Chechnya, the portal “Neft” reports.

Earlier, Abbakh Abdulkhazhiev, the spokesperson for the Ombudsperson for Chechnya in Yugra, has said that “this person will be punished by us personally, if he considers himself a Chechen,” the “Megapolis UGRA” Telegram channel says.

Magomed Kurbanov, the chair of the Rasul Gamzatov National Cultural Centre of the Peoples of Dagestan, condemned the behaviour of Arthur Ilyaskhanov. “We are in Russia, it is our common home,” he said.

This article was originally published on the Russian page of 24/7 Internet agency ‘Caucasian Knot’ on July 26, 2022 at 07:22 pm MSK. To access the full text of the article, click here.