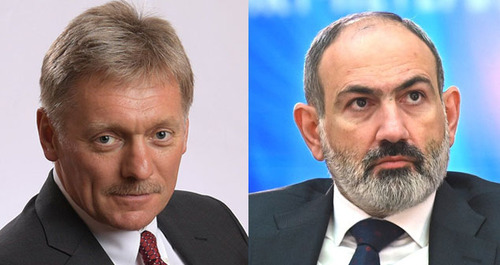 Kremlin reacts to Pashinyan’s statement about functions of Russian peacekeepers

In response to the Nikol Pashinyan’s proposal to discuss the functions of Russian peacekeepers, Russian Presidential Press Secretary Dmitry Peskov has said that the Russian side is acting in Nagorno-Karabakh in accordance with the trilateral agreement and expects its compliance also from Armenia and Azerbaijan.

When commenting on the statement voiced by the Prime Minister of Armenia about the actions of the Russian peacekeepers, Russian Presidential Press Secretary Dmitry Peskov has stated that the contacts between Russia and Armenia will help clarify issues related to the actions of peacekeepers in Nagorno-Karabakh.

The Russian Presidential Press Secretary has also emphasized that the Kremlin is “very closely watching” the events in Nagorno-Karabakh. “Naturally, we are concerned about the aggravation of the situation. We call on the parties to exercise restraint and, most importantly, to comply with all the provisions of the well-known trilateral documents,” Dmitry Peskov said.

This article was originally published on the Russian page of 24/7 Internet agency ‘Caucasian Knot’ on August 4, 2022 at 03:30 pm MSK. To access the full text of the article, click here.