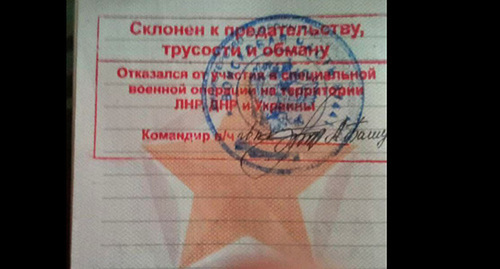 The command of the military unit puts an unreliability stamp into service IDs of those servicemen who refuse to take part in the special operation in Ukraine in order to intimidate others, the lawyers and human rights defenders interviewed by the "Caucasian Knot" believe.

There are many cases when such stamps are put into military IDs (certificates), Maxim Grebenyuk, a lawyer, told the "Caucasian Knot" correspondent. He believes that this practice is "an instruction from the higher command."

Sergey Krivenko, the director of the human rights group "Citizen. Army. Law"*, said that he knew about several such cases – in Dagestan, Pskov and Ryazan, but there were no exact statistics. "It's absolutely illegal [...]. The prosecutor's office has stated this," he told the "Caucasian Knot" correspondent.

Mr Krivenko believes that such stamps can be an initiative "from below." "This is how local officials demonstrate their patriotism," he has concluded.

Such stamps are put up in order to intimidate other "refuseniks" (those who refuse to go to the special operation), so that they should not try to go this way, Oyub Titiev, a rights defender, believes. He has also suggested that this initiative could come "from below." "I don't think this practice is widespread," he has stated.

* The organization is included by the Russian Ministry of Justice (MoJ) in the register of NCOs performing the functions of a foreign agent.

This article was originally published on the Russian page of 24/7 Internet agency ‘Caucasian Knot’ on August 5, 2022 at 04:57 am MSK. To access the full text of the article, click here.