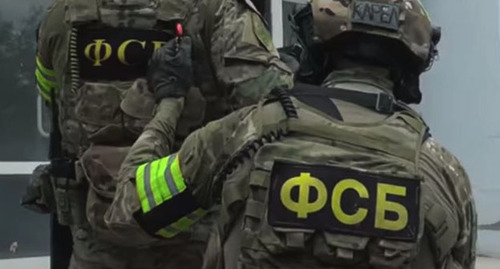 The man, who, according to the FSB (Russian Federal Security Bureau), was preparing a terror act in the Karachay-Cherkessian Republic (KChR), has been detained. Law enforcers treat him as a supporter of the "Right-Wing Sector"*.

According to the FSB, the man, a KChR resident, born in 1992, was detained in the city of Cherkessk. "At the direction of his coordinators, he had planned to commit a sabotage terror act and then depart to the territory of Ukraine," the FSB's Public Relations Centre has informed.

During the searches of the suspect's residence, a hideout with two improvised explosive devices (IEDs) with power equivalent to about three kilos of TNT each was found, as well as components for making IEDs, schemes of approaches to the buildings of the prosecutor's office and the military commissariat, and correspondence with members of the banned organization, the TASS writes with reference to the FSB.

According to the FSB, the man was going to commit a terror act in the prosecutor's office and the commissariat located in Cherkessk. The detainee has confesses, the FSB has added.

*The "Right-Wing Sector" has been recognized as extremist and banned in Russia by the court ruling.

This article was originally published on the Russian page of 24/7 Internet agency ‘Caucasian Knot’ on August 5, 2022 at 10:16 am MSK. To access the full text of the article, click here.