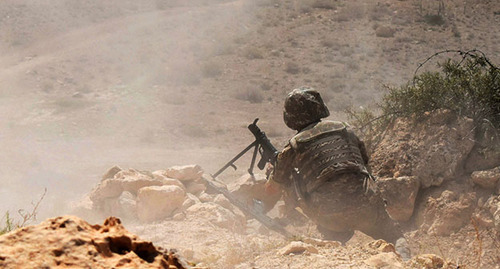 Over the last 24 hours, the positions of the Azerbaijani Army were shelled 12 times; three of them – from the territory of Armenia, and nine – from Karabakh, the Azerbaijani Ministry of Defence (MoD) has informed. Its Nagorno-Karabakh counterpart claims that the Azerbaijani Armed Forces violated the ceasefire regime by using small arms.

"Over the past 24 hours, Armenian armed formations shelled the positions of the Azerbaijani Army for 12 times in total," the press service of the Azeri MoD has stated this morning.

According to the MoD, three times the border positions of the Azerbaijani Army in the directions of the Kelbadjar and Lachin Districts were shelled from the territory of Armenia. "The remaining nine incidents have to do with periodic shelling of Azeri positions located in the territory where Russian peacemakers are temporarily stationed; the shelling was conducted from sniper rifles and various small arms," the Azeri MoD said in its statement.

There are no losses among the personnel and equipment of the Azerbaijani Army.

In its turn, the Nagorno-Karabakh MoD reported a tense situation on the contact line. "On August 4, at night on August 5 and in the morning as of 9:00 a.m., the operative-tactical situation on the contact line was relatively stable, but tension remains. In some directions, the Azerbaijani Armed Forces violated the ceasefire regime by using small arms. There are no losses from the Armenian party," the "Interfax" quotes the MoD's press service.

This article was originally published on the Russian page of 24/7 Internet agency ‘Caucasian Knot’ on August 5, 2022 at 10:58 am MSK. To access the full text of the article, click here.