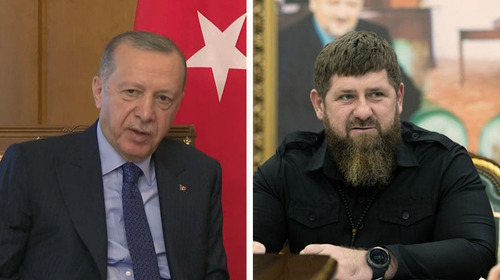 At Putin-Erdogan meeting, Kadyrov agrees to go to Turkey

The head of Chechnya, Ramzan Kadyrov, said that he was included into the delegation that accompanied the Russian president at talks with the Turkish president in Sochi on August 5. The Turkish party offered Kadyrov to make a working trip to Turkey, to which he agreed.

"During the face-to-face talks of Vladimir Putin and Recep Tayyip Erdogan, I personally got acquainted with the Turkish Foreign Minister, Mevlut Chavusoglu, and Khakan Fidan, the head of the Turkish national intelligence organization. We had an informal rich and productive conversation. At the end of the meeting, the distinguished guests invited me to visit Turkey. Of course, I accepted the invitation," the head of Chechnya wrote on his page on the "VKontakte" social network.

A user of the "Caucasian Knot" named andrew.gibson has written a comment about the participation of the head of Chechnya in the Russian delegation at the talks: "Only last December, after the opening of a park named after Djokhar Dudaev in one of Turkish cities, Kadyrov lashed out at President Erdogan with harsh criticism and threatened, in retaliation, to immortalize in Grozny the head of the Kurdish Workers' Party, Abdullah Öcalan, who was sentenced to life imprisonment in Turkey."

On December 10, the administration of the municipality of the city of Korfez in the Turkish Province of Kodjaeli solemnly opened a park named after the first president of Ichkeria, Djokhar Dudaev. Then, the head of Chechnya, Ramzan Kadyrov, stated that the actions of Turkish authorities, which in this way support terrorists, threaten the Russian-Turkish diplomatic relations.

This article was originally published on the Russian page of 24/7 Internet agency ‘Caucasian Knot’ on August 6, 2022 at 10:51 am MSK. To access the full text of the article, click here.