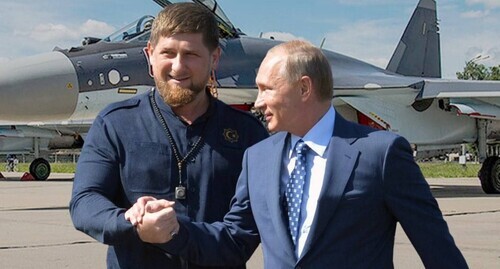 Kadyrov tells about Putin's praise for success in Chechnya's progress

Vladimir Putin has noted Chechnya's high achievements in socioeconomic sphere, the head of the republic, Ramzan Kadyrov, has informed. However, as reported by the "Chechenstat" (Republic's Statistics Committee), the unemployment rate in Chechnya in June 2022 was 11%.

The "Caucasian Knot" has reported that on July 27, Ramzan Kadyrov announced that he had been awarded the Order of Alexander Nevsky by a presidential decree "for his great contribution to the socioeconomic development of the Chechen Republic."

On August 6, Ramzan Kadyrov announced the results of his meeting with Vladimir Putin that took place immediately after the meeting of presidents of Russia and Turkey in Sochi. "I met Vladimir Putin and reported on the socioeconomic situation in the Chechen Republic. The head of state marked the high achievements of the region in this sphere," Kadyrov wrote on his Telegram channel.

However, he himself reported earlier that his republic actually lives on subsidies. On January 24, he announced that the Russian government annually allocates 300 billion roubles for the survival of Chechnya, which "even a month" will not be able to hold out without the support of the federal centre.

This article was originally published on the Russian page of 24/7 Internet agency ‘Caucasian Knot’ on August 6, 2022 at 05:33 pm MSK. To access the full text of the article, click here.

Kadyrov awarded Order of Alexander Nevsky due to his loyalty to Kremlin, Kadyrov boasts of a new award, Social media users ironize Kadyrov’s award for his contribution to dentistry.