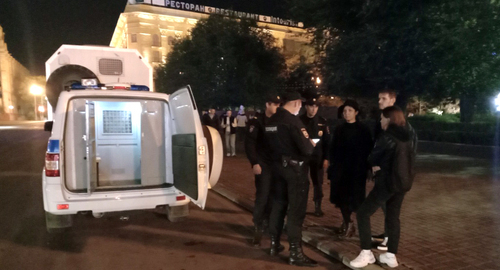 The anti-mobilization actions were held in Southern Russia, in Volgograd and Krasnodar; also, a protest in Grozny was suppressed by law enforcers. More than 1300 people were detained at street protests in 39 Russian cities; at least 16 were detained in cities of Southern Russia, human rights defenders have counted.

The "Caucasian Knot" has reported that on September 21, protest actions against mobilization were held in Krasnodar and Volgograd. In Krasnodar, according to rights defenders, 14 protesters were detained. In Volgograd, law enforcers detained eight people. The protesters refused to pronounce slogans and demonstrate posters, as they were afraid to openly express their opinions.

In Grozny, according to eyewitnesses, on September 21, about 30-40 women went out to a rally against mobilization of their relatives, but the police stopped their rally and took away all the protesters.

As of 11:09 a.m. Moscow time on September 22, a total of 1307 people had been detained in Russia for taking part in protests against mobilization or being close to the venues, the "OVD-Info"* human rights project reports on its website.

The largest numbers of detainees were in Moscow (527 persons) and Saint Petersburg (480).

It should be noted here that Ramzan Kadyrov said that "15-20 women came out to the rally in Grozny." He has treated the opponents of the mobilization as people's enemies and suggested that their husbands should be sent to Ukraine.

This article was originally published on the Russian page of 24/7 Internet agency ‘Caucasian Knot’ on September 22, 2022 at 11:15 am MSK. To access the full text of the article, click here.

After rally, Kadyrov declares opponents of mobilization enemies of people, Call for rally against mobilization spread in Chechnya, In Chechnya, police and National Guard announce more than 2400 vacancies after sending law enforcers to Ukraine.