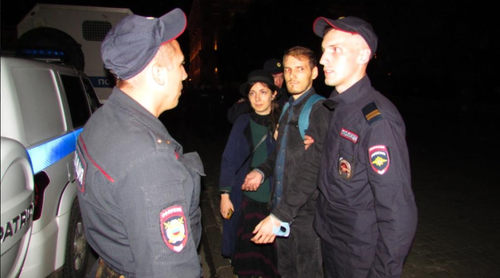 Volgograd residents express their protest against mobilization with silence

The Volgograd townspeople, who came to the city centre to protest against the announced partial mobilization, did not utter slogans or display posters. They said they were afraid to openly express their opinions.

The "Caucasian Knot" has reported that on September 21, the administration of the Volgograd Region reported on the establishment of a draft commission for executing the partial mobilization. On the same day, Volgograd law enforcers detained eight protesters against mobilization.

On September 21, the protesters who rallied in central Volgograd called their action a "passive" one, because they were afraid of detentions. People were sitting on benches and stood alone or in small groups. No one uttered any slogans or displayed posters.

"In our country there is no freedom of speech and opinion. We can't criticize the government and armed forces; therefore, the actions acquire such a passive character," said one of the protesters.

Another female protester said that on September 21, at work, her colleagues, who have sons of mobilization age, thought about how their children could avoid participating in the special operation.

This article was originally published on the Russian page of 24/7 Internet agency ‘Caucasian Knot’ on September 22, 2022 at 03:40 am MSK. To access the full text of the article, click here.