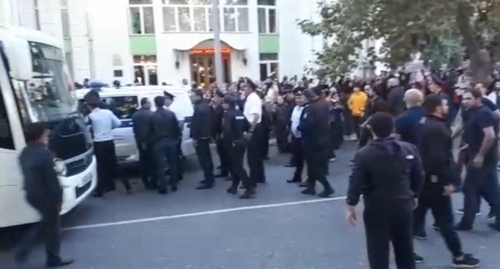 A total of 101 persons were detained at a protest against mobilization in Makhachkala, the human rights project "OVD-Info"* has reported on its website.

The "Caucasian Knot" has reported that on September 25, in Makhachkala, law enforcers violently dispersed a protest action against mobilization. According to the "Chernovik" (Draft) portal, about 100 people out of the total 300 participant in the rally were detained. Some of audience had spontaneously joined the rally.

After the rally in Makhachkala, eight criminal cases were initiated on attacks on policemen, and 46 protocols were drawn up on the participation in an unsanctioned rally, the "Kavkaz.Realii"* project reports, citing a source from the local Ministry of Internal Affairs (MIA). "Eight criminal cases have been opened due on attacks on policemen. Among the figurants there is at least one minor," the project quotes the source as saying.

Let us remind you that on September 25, in the village of Endirey, Khasavyurt District, at least several dozen people also held an action against mobilization. Law enforcers tried to disperse the protesters with submachine gun bursts.

This article was originally published on the Russian page of 24/7 Internet agency ‘Caucasian Knot’ on September 26, 2022 at 10:21 am MSK. To access the full text of the article, click here.