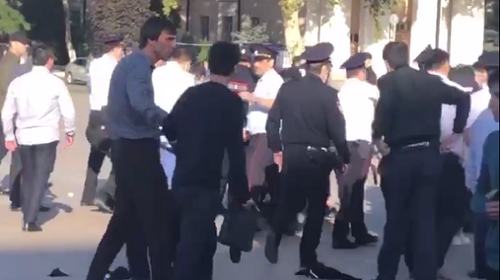 The desire to get estimates of the violent dispersal of the anti-mobilization protests in Makhachkala from well-known athletes, including Khabib Nurmagomedov, highlighted the absence of political and social leaders in Dagestan. Meanwhile, the athletes, who are perceived as opinion leaders in the republic, mostly preferred to remain silent, Dagestani journalists point out.

The “Caucasian Knot” has reported that fans of Khabib Nurmagomedov reproached the former UFC champion for his silence concerning the protests against the mobilization in Dagestan. Mixed martial arts (MMA) fighters Magomed Ismailov, Mukhammad Mokaev, and Amirkhan Oev stated that law enforcers dispersed protesters in Makhachkala with excessive brutality.

Khabib Nurmagomedov closed comments on his posts due to his unwillingness to discuss the topic of the protests in Dagestan, journalist Idris Yusupov pointed out. According to the journalist, only a small number of well-known persons expressed their opinion about the protests.

The authorities of Dagestan refused to recognize the street protests in the republic as an initiative of local residents. On September 26, Sergey Melikov, the leader of Dagestan, stated that the protest actions in Makhachkala were prepared and controlled, “including from abroad.”

The function of the Dagestani athletes is to defend their sports titles, they are not politicians or public defenders, Magomed Magomedov, the deputy editor-in-chief of the weekly newspaper “Chernovik” (Rough Draft), emphasizes.

According to Magomed Magomedov, the demand from Khabib Nurmagomedov and other athletes to respond to sensitive issues is caused by “the weakness of the society.” The deputy editor-in-chief of the “Chernovik” notes that the resentment of the athletes will not affect the behaviour of the police.

Gadjimurad Sagitov, the editor-in-chief of the “Novoye Delo” (New Clause), believes that in Dagestan, the athletes are perceived as opinion leaders and that their position on sensitive issues is very important to their fans.

This article was originally published on the Russian page of 24/7 Internet agency ‘Caucasian Knot’ on October 4, 2022 at 11:28 am MSK. To access the full text of the article, click here.

Dagestani athletes criticize law enforcers for violent dispersal of rally in Makhachkala, Over hundred people convicted after protests in Makhachkala, Public apologies of opponents of mobilization in Dagestan posted on Internet.