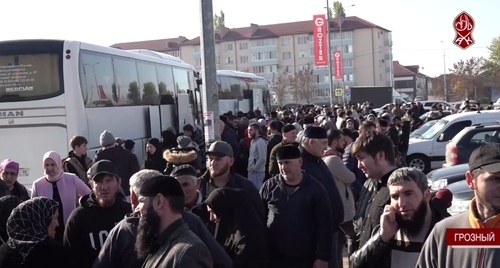 The relatives of those who perished "while performing their patriotic duty in the territory of Ukraine" have a chance to perform a short Hajj with the support of the Kadyrov Fund. This was announced by the Muftiate of Chechnya amid Ramzan Kadyrov's reports about collective prayers held throughout the republic for the success of the military operation.

The "Caucasian Knot" has reported that on October 27, Kadyrov admitted that 23 Chechen fighters were killed and 58 others were wounded in the Kherson Region of Ukraine. Prior to this, Chechen authorities officially recognized the deaths in Ukraine of only 29 residents of the republic.

Now, the families of those who perished "in the performance of their patriotic duty in the territory of Ukraine" are provided with an opportunity to perform a small Hajj – an Umra, the Chechen Muftiate has informed.

"This became possible thanks to the support of the RPF (Regional Public Fund, – note of the "Caucasian Knot") named after Akhmat Kadyrov. The Fund has also allocated funds to the pilgrims in the amount of USD 1000 each," says the telegram channel of the Spiritual Administration (SAM or Muftiate) of Chechnya.

The Umra, unlike the "big" Hajj, can be performed at any time of the year, with the exception of the months allocated for the Hajj, the website of the "Umma Tour" tourist operator has explained.

The organization of a small Hajj for relatives of the Chechen law enforcers who perished in Ukraine, as well as the Kadyrov's report on the children praying for the success of the military operation, is intended to reduce the degree of tension among the state-funded employees, which has increased due to the need to regularly attend night prayers in mosques to pray for the success of the military operation, the reader of the "Caucasian Knot" with the nickname of avery has suggested.

This article was originally published on the Russian page of 24/7 Internet agency ‘Caucasian Knot’ on November 13, 2022 at 02:59 pm MSK. To access the full text of the article, click here.

Kadyrov and Alaudinov respond to reports about Chechen fighters killed near Lisichansk, Chechen commander calls on unemployed to go to the frontline, Mobilization cancellation in Chechnya is reaction to mothers' protest in Grozny.