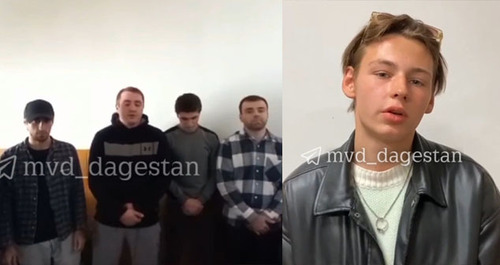 The police of Dagestan posted on the Internet a video with an apology from a foreman of a film crew and extra actors for their trifling video message on behalf of armed members of rural jamaat. In Dagestan, not all topics may be joked about, the Ministry of Internal Affairs (MIA) warns.

The “Caucasian Knot” has reported that the practice of public apologies adopted in Chechnya has also spread to other regions of Russia. It has also taken root in Dagestan: in particular, the republic’s MIA has repeatedly posted records with detainees’ apologies for various offenses and misdemeanours.

In June, the Dagestani MIA explained that public apologies are appropriate in cases where a person not only broke the law, but also publicly disregarded public opinion.

The video, which became the reason for another apology, was posted on Telegram channel of the Dagestani MIA.

“Taking into account some events from the past, not all topics may be joked about in our region. Not everyone is able to understand such kind of videos. Entrance to the Saltinsky waterfall is allowed! Unlike the jokes that disturb the public,” the MIA of Dagestan explained.

The republic’s MIA also reported that a member of the film crew personally addressed residents of Dagestan. “Dagestanis are people who not only have a great sense of humour, but who also have big hearts! They understood and forgave, but warned: you should better not joke like that anymore,” the Dagestani MIA warned in its message.

This article was originally published on the Russian page of 24/7 Internet agency ‘Caucasian Knot’ on November 14, 2022 at 06:21 pm MSK. To access the full text of the article, click here.