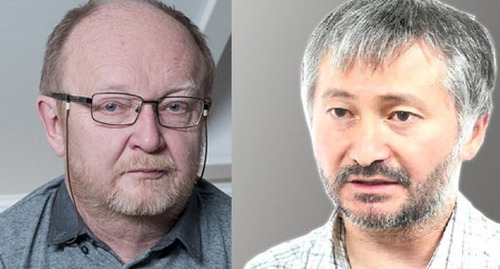 The man who killed a law enforcer in Grozny hardly acted alone, and it is logical to consider the photo with the flag of the “Islamic State” (IS, a terrorist organization, banned in Russia by the court, – note of the “Caucasian Knot”) as a sign of his connection with the organization, researcher Akhmet Yarlykapov points out. It is unlikely that the man who attacked the law enforcer was connected with the IS, otherwise he would have mentioned the organization on his dying audio recording, Aleksei Malashenko argues.

The “Caucasian Knot” has reported that on November 21, the man who attacked an inspector of the road police (known as GIBDD) with a knife was shot dead in Grozny. From the audio recording, posted on the social media as an appeal from the person who was plotting the attack, it follows that the young man acted alone. The attacker was identified as Movsar Zakriev, a resident of the village of Aldy, the “Niyso” Telegram channel reports. Human rights defenders announced that relatives and friends of Movsar Zakriev were kidnapped by law enforcers.

The ”Baza” Telegram channel posted a photo of the alleged attacker on the policeman in Grozny. The photo exhibits a man wearing a balaclava and holding a knife and the flag of the “Islamic State”, a terrorist organization banned in Russia.

“If a person independently came with those symbols, then it seems to me that this is enough to trace his connection with the IS. The young man himself consciously uses those symbols, which means he wants to say that he is connected with them, belongs to the network of the organization,” believes Akhmet Yarlykapov, Senior Researcher at the Centre for Eurasian Studies at the Moscow State Institute of International Relations (known as MGIMO).

The researcher called unconvincing the version that the attacker acted alone.

The number of attacks on law enforcers in Northern Caucasus has decreased in recent years, the researcher emphasized.

Caucasus expert Aleksei Malashenko did not agree that the photo testifies to the connection of the Grozny attacker with the terrorist organization.

“An offended, crazy, unbalanced person can attack a policeman with a knife. It is not necessary to be a member of a terrorist organization to arrange such an attack,” the Caucasian expert said.

Police Junior Lieutenant Djabrail Djamalov, who was killed in a mosque, was buried on November 22, he had a wife and three children, the Chechen Ministry of Internal Affairs (MIA) reported.

This article was originally published on the Russian page of 24/7 Internet agency ‘Caucasian Knot’ on November 23, 2022 at 08:49 pm MSK. To access the full text of the article, click here.

Policeman attacked and killed in Grozny, Knife attack on policeman was the first in Chechnya in 16 months, Stabbing law enforcers in Grozny was the eighth attack in NCFD since May 2018.