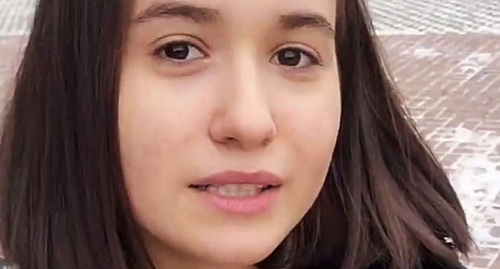 In Saint Petersburg, policemen have set Leyla Gireeva, a detained native of Ingushetia, free because of the increased interest of journalists and human rights defenders in the story of the girl's escape from domestic violence, the latter have stated.

The "Caucasian Knot" has reported that on November 23, law enforcers detained the 18-year-old Leyla Gireeva, who had fled domestic violence but was found by her relatives in Saint Petersburg. She was released the same day. The girl is now in a safe place, but the threat of her forced return to her family remains, the SK SOS Crisis Group has stated.

Vladislav Khorev, an activist from the Group, told that he came to Gireeva to the police station after she had informed about her detention. He is sure that the publicity helped to avoid Leyla's giving out to her relatives.

A similar opinion was expressed by Alexandra Miroshnikova, another activist of the SK SOS Crisis Group. She doubted that policemen should have detained the girl who had asked for help. "Most likely, they wanted to hand Leyla over to her relatives. This is contrary to the victim's request, who called hoping to be rescued from her relatives," Ms Miroshnikova has noted.

Leyla Gireeva was lucky to be at the police station not in Northern Caucasus, says Aida Mirmaksumova, the head of the "Fathers and Daughters" project. "If Leila had been hiding in an apartment in another Caucasian republic, most likely policemen would have given her out to her relatives, as happened with Khalimat Taramova," Ms Mirmaksumova believes.

She has added that the capital's policemen usually "dislike getting involved with such Caucasian topics." By accusing them of thefts, relatives try to prevent girls from escaping domestic violence, Aida has concluded.

This article was originally published on the Russian page of 24/7 Internet agency ‘Caucasian Knot’ on November 25, 2022 at 01:12 pm MSK. To access the full text of the article, click here.

Ingush native Leyla Gireeva remains in danger due to persecution from her relatives, Native of Ingushetia, who ran away from home, tells threat of murder by relatives, Woman from Dagestan tells about her victory over domestic violence.