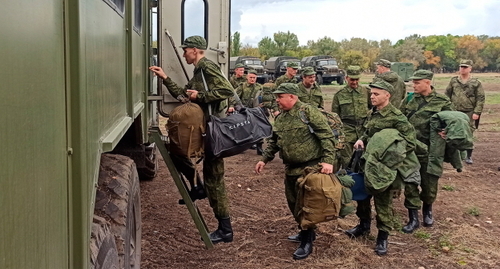 Kuban authorities react to reports about summonses to military training

The information that the military commissariats (registration and enlistment office) of the Kuban (Krasnodar Territory) demands from enterprises to allocate employees for sending to military training camps is not true, the territorial operative headquarters has stated.

The "Caucasian Knot" has reported that on September 21, 2022, President Vladimir Putin announced mobilization, and on October 28, the Russian Defence Minister reported on its completion, but no corresponding presidential decree followed.

The territorial operative headquarters has declared that a letter spread in social networks on behalf of the military commissariat of the Krasnodar Territory about the need to call up employees of "a number of enterprises and institutions" for military training was a fake.

Let us remind you that on September 21, 2022, on the day the mobilization was announced, an order was posted by the military commissar for the Yeysk and Scherbinovsky Districts of Kuban with a clause prohibiting those liable for military service to leave their dwelling settlements. The operative headquarters of the Krasnodar Territory called this information fake, and the regional military commissariat admitted that the district military commissar had mistakenly forbidden conscripts to leave their residences.

This article was originally published on the Russian page of 24/7 Internet agency ‘Caucasian Knot’ on January 3, 2022 at 08:50 am MSK. To access the full text of the article, click here.