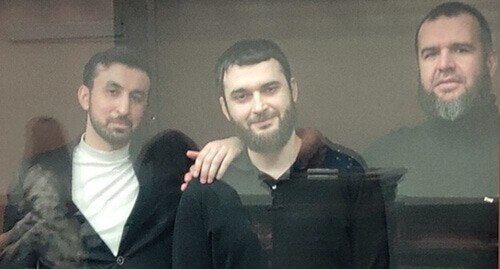 Defence of Dagestani journalist Gadjiev treats presentation of proofs over

Experts interrogated at trial of Abdulmumin Gadjiev have confirmed that no Sharia Law superiority was promoted in his publications. However, the arrest of the figurants in the case, Gadjiev, Abubakar Rizvanov and Kemal Tambiev has been extended for another three months.

The "Caucasian Knot" has reported that on January 12, an expert from of the forensic examination centre of the Ministry of Justice (MoJ) confirmed in court the conclusions of his colleagues that there were no crime attributes in Gadjiev's publications.

Abdulmumin Gadjiev, one of the editors of the "Chernovik" outlet; Abubakar Rizvanov, the head of the "Ansar" charity fund, and Kemal Tambiev, have been in custody since June 2019 on charges of financing terrorism.

The defence has already presented almost all of its proofs, Arsen Shabanov, one of Gadjiev's advocates, has stated.

Ruslan Nagiev, Kemal Tambiev's advocate, also believes that they have presented all possible evidence of their clients' innocence to the court.

"Witnesses were summoned, who testified that Kemal (Tambiev) had nothing to do with banned organizations. Moreover, even the prosecution witnesses have recalled their testimonies given during the preliminary investigation and testified in favour of Tambiev. The results of the examination of Gadjiev's articles are on our side," Mr Nagiev has concluded.

This article was originally published on the Russian page of 24/7 Internet agency ‘Caucasian Knot’ on January 20, 2022 at 05:41 am MSK. To access the full text of the article, click here.