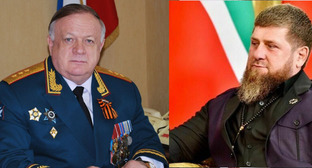 Continuation of the blockade of Nagorno-Karabakh, fate of Azerbaijani oppositionists, Kadyrov’s dispute with Russian generals, Yangulbaev family case, firing in Sagaredjo, – see the review of these and other events in the Caucasus during the week of January 16-22, 2023, prepared by the “Caucasian Knot”.

The Lachin Corridor linking Nagorno-Karabakh with Armenia and the outside world remains blocked for 42 days. A food coupon system has been introduced in the unrecognized republic because of the lack of food in Karabakh.

On January 20, it became known that residents of Stepanakert faced a shortage of food on coupons. There are around-the-clock lines in stores, and most people line up to buy eggs, dairy products, and tobacco products, as these goods can be bought without coupons.

Besides, Karabakh suffers from a shortage of medicines and medical officers. Specialists from Armenia cannot arrive because of the blockage of the Lachin Corridor, 400 patients wait for surgeries to be conducted, the government of Nagorno-Karabakh announced on January 15. Hospitals are postponing surgeries and medical treatment, which could worsen the condition of some patients, doctors say. They call on the authorities and peacekeepers to urgently take measures to unblock the Lachin Corridor.

On January 19, the European Parliament adopted a resolution on the humanitarian consequences of the blockade of Nagorno-Karabakh and called on Baku to immediately open the only road for residents of the region that connects them with the outside world. According to lawyer Ara Gazaryan, one of the consequences of the resolution may be the refusal of the European Union (EU) from the supply of Azerbaijani energy carriers.

On January 22, oppositionist Tofig Yagublu was released after 30 days of arrest for disorderly conduct and failure to obey the police. Tofig Yagublu and his comrades-in-arms ended the hunger strike, which they declared in protest against the unjustified, in their opinion, detention.

Anar Guseinov, an activist of the Popular Front Party of Azerbaijan (PFPA), detained after the march on the anniversary of the “Black January” events, was arrested for 30 days on the charges of disorderly conduct and failure to obey the police. His colleagues from the PFPA called the reasons for the Anar Guseinov’s arrest politically motivated.

On January 21, in Baku, a court extended until February 28 the arrest of Bakhtiyar Gadjiev, who has been on a hunger strike for 14 days demanding his release from custody.

On January 18, Azerbaijani police released blogger Djamil Mamedli, who was detained on the charges of disorderly conduct and resistance to the police. The blogger is accused of assaulting Djeikhun Agabalaev, a participant of a road accident, and his mother.

On January 16, the Baku Court on Grave Crimes sentenced activist Djafar Mirzoev, who was detained on a drug case after returning from Germany, to six years of imprisonment.

On January 20, Abubakar Yangulbaev, a son of Zarema Musaeva, on the anniversary of her detention in Nizhny Novgorod, called on Ramzan Kadyrov to release his mother on the terms of an exchange. “Don’t touch women. Take me instead of her,” Abubakar Yangulbaev stated.

On January 20, 2022, Zarema Musaeva was taken to Grozny, where she was arrested on the charge of assaulting a law enforcer. Abubakar Yangulbaev emphasized that his mother suffered from diabetes mellitus with multiple complications and that penal colonies had no facilities to keep people suffering from such disease. The ambulance was repeatedly called for Zarema Musaeva to the court and the SIZO (pre-trial prison).

This week, Ramzan Kadyrov actively argued with generals of the Russian army. On January 16, the leader of Chechnya advised General Vladimir Boldyrev to recall the “history of 2004,” when “Chechen fighters, together with Ingush fighters led by Shamil Basaev, entered Nazran and took away all the weapons, and after that, as a failed commander, Vladimir Boldyrev was demoted and transferred to another headquarters of the Russian Ground Forces.”

On January 19, Ramzan Kadyrov called a “provocation” against Muslims a statement voiced by Lieutenant General Viktor Sobolev, a member of the Russian State Duma Defence Committee, about the need for military men to shave their beards. After criticism from Ramzan Kadyrov, Viktor Sobolev stated that for religious military men, the presence of beards is not only acceptable, but also desirable.

On the night of January 20, in Sagaredjo (the region of Kakheti in Georgia), a former military man opened fire from a balcony of a residential building. Four passers-by and a policeman were killed, and five persons were injured. According to the Ministry of Internal Affairs (MIA), the shooter committed suicide.

Three victims still stay in the hospital, and the condition of one of them remains severe.

This article was originally published on the Russian page of 24/7 Internet agency ‘Caucasian Knot’ on January 23, 2022 at 08:42 am MSK. To access the full text of the article, click here.