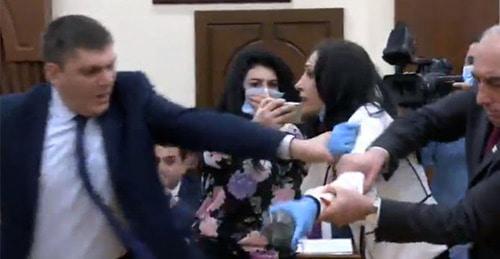 At today's sitting of the Council of Elders of Yerevan, activists of the "Apricot Country" brought cans with samples of sewage water taken from an open area near Nubarashen Prison, but were physically abused in the brawl with their colleagues.

The "Caucasian Knot" has reported that on February 12, residents of Yerevan blocked the road leading to the Nubarashen Prison and demanded to repair the prison sewer system, complaining about the unbearable stench and unsanitary conditions.

Marina Khachatryan and Sona Agekyan, members of the Council of Elders from the "Apricot Country", trying to draw authorities' attention to the problem, wanted to put the cans with samples of sewage water onto the table of Taron Margaryan, the Mayor of Yerevan, but their counterparts from the ruling Republican Party of Armenia (RPA) blocked their way, and then forced them out of the hall, the "Caucasian Knot" correspondent reports.

The "Apricot Country" Party has stated that in the course of the brawl its members in the Council of Elders were physically abused, and the party now intends to apply to law enforcement bodies.

Zaruhi Postanjyan, the head of the faction of the "Apricot Country" in the Council of Elders of Yerevan, has noted that "they only wanted to show the Mayor Taron Margaryan in what conditions people live near Nubarashen Prison, and what stench there is."

Marine Khachatryan, a member of the "Apricot Country", told the "Caucasian Knot" correspondent that several RPA members of the Council of Elders attacked her at the moment when she wanted to give the above cans with the sewage water from Nubarashen to Taron Margaryan. According to Khachatryan, she was hit several times on her head.