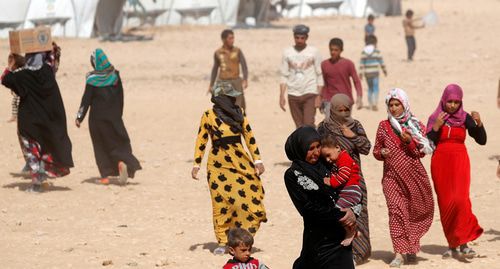 Female natives of Northern Caucasus with children who stayed in a camp in Syria fear for their lives because of the Turkish military operation and ask Russia to evacuate them, says a relative of one of the women. Audio appeals to the Russian authorities state that there are also female natives of Dagestan and Chechnya in the camp.

On October 9, Turkey launched a military operation under the name "Source of Peace" on the border of Syria against the Kurdish forces. On October 12, 10 families of Syrian Armenians left the combat zone.

Female citizens of Russia, who were kept in prisons under the control of Kurdish militants, fear for their lives, the "Caucasian Knot" correspondent has been told by Zemfira, a resident of Dagestan.

"A wife of my son with my three grandchildren stays there. They left a Kurdish camp, went to the Turkish forces for a very long time, and spent a night in the desert, suffering from hunger and cold ... There are 15 women and 27 children there," the woman said.

On October 14, the Russian "RTVI" made public audio records of appeals received, according to Kheda Saratova, a member of the Human Rights Council (HRC) under the leader of the Chechen Republic, from Russian citizens kept in the Ain Issa camp.

"There are a lot of people from Dagestan among us and from the Caucasus in general," said a woman on one of the audio records. She also added there were about 200 people in the camp.

In another audio appeal, a woman says that Russian citizens fear for their fate.

This article was originally published on the Russian page of 24/7 Internet agency ‘Caucasian Knot’ on October 17, 2019 at 11:03 am MSK. To access the full text of the article, click here.

Activists support Kurdish rally at US Embassy in Armenia, Volunteers to help children-returnees from Syria to Dagestan, Social network users discuss evacuation of 33 children from Iraq.