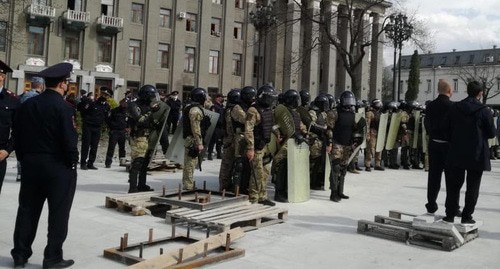 In Vladikavkaz, a spontaneous protest action against the regime of self-isolation is underway. Law enforcers called for reinforcements. Protesters began throwing stones and bottles at the law enforcers.

Several hundred people have demanded the resignation of North-Ossetian leader Vyacheslav Bitarov and the dissolution of the parliament. The regime of self-isolation is the best way to prevent the spread of the coronavirus infection, Vyacheslav Bitarov has explained to the people who gathered in the streets. The leader of North Ossetia left the square, being accompanied with whistles and shouts "Resign!"

Mikhail Skokov, Minister of Internal Affairs, tried to calm down the people, who gathered in the square, but the protestors continued chanting: "Resign!", the "Yug. MBH Media" reported on its Telegram channel.

The active phase of the unsanctioned gathering has finished, but fighters of the National Guard of Russia have cordoned off the square, the "OsNova" reports.

This article was originally published on the Russian page of 24/7 Internet agency ‘Caucasian Knot’ on April 20, 2020 at 03:13 pm MSK. To access the full text of the article, click here.