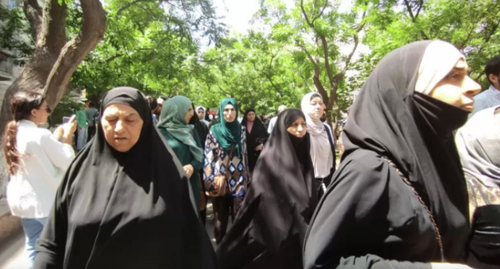 The police did not allow activists, who supported a protest of Talekh Bagirzade against insults of Allah by law enforcers, to approach the administration of the President of Azerbaijan.

The “Caucasian Knot” has reported that on June 3, Talekh Bagirzade, the convicted leader of the “Muslim Unity” movement, went on a hunger strike, demanding to punish the law enforcers, who, according to supporters of the “Muslim Unity” movement, were blaspheming while torturing believers. By June 16, other 12 prisoners were participating in the hunger strike in solidarity with Talekh Bagirzade.

Today, about ten female believers have tried to hold a protest action in front of the administration of the President of Azerbaijan with the demand to punish the law enforcers who insulted God. The women gathered in front of the “Icheri Sheher” metro station to march about 300 meters towards the presidential administration. However, the police who arrived at the metro station blocked their way. A police officer urged the women to allocate three or four representatives to go to the reception department of the presidential administration, the “Caucasian Knot” correspondent reported.

In response, one of the protesters, a young woman wearing a hijab, said that the state should punish those who insulted Allah. “For almost three weeks, our brothers in prisons have been on a hunger strike and there is no reaction from the authorities. We visited the reception department of the presidential administration, but no reaction followed. Therefore, we have come out to a protest today,” the young woman said.

However, the police did not allow the women to march to the presidential administration and pushed them back inside the “Icheri Sheher” metro station.

This article was originally published on the Russian page of 24/7 Internet agency ‘Caucasian Knot’ on June 22, 2022 at 12:48 pm MSK. To access the full text of the article, click here.